Holidays in the Alps Apuane

Excursions to the Alps for a vacation in Tuscany Dream 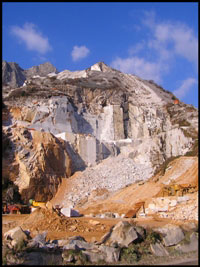 The Alps dominate the Versilia coast and extend about 40 km, giving tourists a breathtaking view: the mountains through the protected regional park crossed by a network of well marked trails for walkers. For those who want to deepen the already beautiful sight that offers the mountain in the distance, there are many well marked tracks that depart from the streets and walk towards the mountains. Most routes are located high in areas east of Forte dei Marmi and Pietrasanta. Nearby are the main Italian cities of the production of marble mining: Massa and Carrara.

The Alps are in a unique and enviable that led to the creation and preservation of unique and varied ecosystems, from tundra to alpine meadows to the Mediterranean pastures. There are also an incredible variety of wild flowers that help to make the area one of the richest botanical oasis of Italy. Tourists the eye stand out more definitely the great expanses of forest with beech trees that accompany most low and ridges that provide sanctuary to many species of birds that inhabit these mountains ideal spot for tourists keen on birdwatching, but not limited to, often encountered in some protected species of mammals such as marmots.

Excursions to the Alps

From Lavignani, a small village accessible by a bus from Forte dei Marmi and Pietrasanta, you log on to the main group of peaks settemtrionale Apuane around the Pania della Croce. It starts from a road used for mining work and you come to Mount Corchia, half dug to get the marble. It 'absolutely forbidden to visit the marble quarries in working days. If you want to rest there in the vicinity of the Refuge Joseph Fero, raggiungibile n.9 onto the footpath at the bottom of the road for the quarry. From the refuge we can get on top until the Pania della Croce, one of the most beautiful hikes in the area.

Following the path n.38 CAI, the village of Colonnata, we arrive at a dense grid of trails around the mountain and the mountain Rason Grondice. A Campo Cecina is Rifugio Carrara, open year round, from which you can take the trails more accessible. To reach the heights surrounding the southern mountain Forato recommend as starting point the beautiful village Stazzema, where you can stay in one of several hotels. Stazzema can be reached by bus which passes Forte dei Marmi and Pietrasanta via Farnocchia, where you can take some easy trails through the woods.

The typical excursion, to which many tourists rely implies a slight climb up through chestnut woods to reach the point, a huge rock from the top flat, mentioned by Dante Alighieri in his Divine Comedy. Below the cliff, there is the Rifugio Forte dei Marmi with 45 beds, the perfect place for a base from which to take excursions along the main ridge: This is one of the easier hikes, a picnic for a day that brings the Tourists to the top of the mountain before falling Ninth to the refuge for a snack and return to the paths through Stazzema n.121/126.